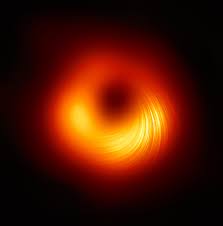 A black hole is a region of space-time that is so dense that it has an infinite gravity pull at its singularity. The pull is so strong that not even light can escape.  They are produced mainly as a result of collapsed supergiant stars, after the supernova explosion.

There are many different kinds of black holes:

These are the tiniest black holes currently known, with the majority forming from a supernova or the cataclysmic explosive death of a star.

The accretion discs of intermediate-mass black holes in the whirlpool galaxy can be less than 4 million degrees Celsius. This could indicate that a larger cloud of gas and dust is enveloping the larger black hole, spreading it out and lowering its temperature. Smaller black hole mergers or supernovae of extra-massive stars could have created these intermediate black holes.

There are many different parts of a black hole:

The singularity is one of the more commonly known parts. The centre of a black hole is a gravitational singularity, which is the point where gravity is so strong that spacetime itself breaks down.

The event horizon is the point of no return. Nothing can escape from it, as its escape velocity surpasses the speed of light. The minimum speed required for a free, non-propelled item to escape the gravitational pull of a huge body is called the escape velocity. From the observer’s perspective, every object approaching the horizon appears to slow down and never quite crosses it.

An accretion disc is a structure that resembles a disc and is formed by diffused material orbiting a massive central body. In the case of a black hole, it’s made up of gas, dust, and other stellar debris that has come close to the black hole but not quite fallen into it and forms a flattened band of spinning matter around the event horizon.

The photon sphere is a zero-thickness spherical boundary in which photons, travelling along tangents to the sphere, are imprisoned in a circular orbit around the black hole. Their orbits would be dynamically unstable, so any minor disruption, such as a particle of infalling matter, would generate instability that would build over time. Either causing the photon to escape the black hole or spiralling inward, eventually crossing the event horizon. While light can still escape from the photon sphere, any light travelling in the other direction would be trapped by the black hole.

With his theory of general relativity, Albert Einstein predicted the existence of black holes in 1916. Many years later, in 1967, American scientist John Archibald Wheeler invented the term black hole. The first real black hole was discovered in 1971, after decades of only knowing about them as theoretical objects.